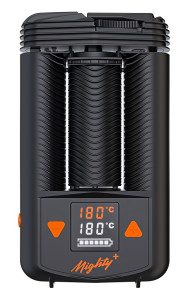 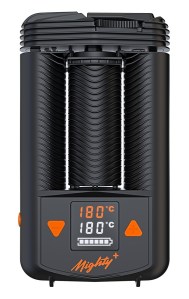 Storz & Bickel finally updated the Mighty vaporizer. The original hit the market in October 2014 and quickly became a fan favorite despite its unwieldy form factor and market-topping price. Users point to the quality of the vapor, airflow and its certification as a medical device as primary reasons for buying the vape.

The new version is called the Mighty+ and features a ceramic-coated chamber, USB-C charging, a 60-second startup time and a new mode that will quickly boost the current temperature. And yes, this version has little feet so that it can stand vertically on a table. The Mighty+ carries a $399 MSRP and is available for purchase on September 23.

The company also updated two of its other products. The Volcano is now available in matte black, and the Crafty+ comes with a ceramic filling chamber and USB-C charging that reduces charging time by 25 minutes.

Storz & Bickel managed to get the Mighty+ certified by UL, a U.S.-based global safety certification company. The Mighty+ conforms to UL8139, becoming the first dry herb vaporizer to carry UL logo officially. To S&B, the UL certification is significant. The company has long differentiated itself from its competitors with a certification from TUV certifying two of its vapes, the Mighty and Volcano, as medical devices. The UL nod certifies the Mighty+’s components comply with the testing agency’s safety standards covering the electrical, heating, battery and charging systems.

“The Underwriters Lab (UL) came out with a certification,” said Andy Lytwynec, VP of Global Vape Business at Canopy Growth, “and it created a bullseye target for us. It took a lot of collaboration with them, and we just recently achieved certification.”

Lytwynec explained that S&B sees consumers increasingly scrutinizing vaporizer options and feels the UL certification gives owners additional peace of mind that the device will not implode in their pocket. “For S&B, we think it’s the beginning of a trend within the vaporizer market for consumers to be a bit more diligent and thoughtful, saying ‘Well, hold on a second, like, has a third party actually gone through the rigors of testing this.’ ”

The Mighty+’s new features are incremental updates developed from customer feedback. The device charges over USB-C, which can deliver an 80% charge in 40 minutes. It also heats up in 60 seconds, and hitting the temperature button three times activates an even quicker so-called Superbooster mode that quickly bumps the temp by 59 degrees. The filling chamber is now coated in ceramic, which, if nothing else, should make maintaining a clean oven a bit easier.

Mighty loyalists will be disappointed to hear the bright LED remains from the original. Some users find the screen too bright in a dark room and susceptible to UV light that dims the screens when outside. The battery system appears to be a carry-over from the original too.

The form factor is the same, except for the addition of tiny feet. The original cannot stand on its own, making filling the top-mounted bowl challenging without a third-party stand. Now there are little fins to help the Mighty+ stand on its own.

How do the changes impact performance? Unfortunately, I can’t tell you until I get the device next week.

I asked Lytwynec about the Mighty’s use of plastic in the top-mounted cooling chamber. Competitors are moving to glass or ceramic for improved taste, I pointed out. Lytwynec notes the Mighty+ is made of a new plastic polymer, and S&B is focused on using materials that allow its devices to be certified as medical devices. The company is aware of third-party accessories, but feels the current cooling chamber offers the right benefits to the consumer.

The company also unveiled a new version of the Crafty+, its smaller dry herb vape. The new model features many of the improvements found in the new Mighty+. There’s also a new version of the company’s original vape, the desktop Volcano. This new version is finished in a scratch-free matte black finish and will retail for $699 starting September 9.

Storz & Bickel sits atop Canopy Growth Corporation’s device segment. According to Canopy’s latest financial release, S&B recorded $24.1 million in the first fiscal quarter of 2022. This marks a 41% ($7 million) year-over-year increase. This growth is attributed to an expansion of its distribution network.

Editor’s note: A previous version of this article had the Mighty+ launching on September 16. That is incorrect and the article is now updated with the proper date of September 23.